A trip to Washington D.C.to view, and photograph the many memorials, especially the Vietnam War Memorial, has been on my list of things to do for a very long time. When I found out that the Moving Wall was going to be in a neighboring town, I knew I had to go. The Moving Wall is a 1/2 size replica of the Vietnam Wall Memorial that travels around the country. For more information on The Moving Wall and to find out if it will be displayed near you, please visit www.themovingwall.org.

On our first trip to the Moving Wall, I was a little surprised. There was a big crowd, but the experience didn't take on the somber feeling that I thought it would. The crown was milling around the wall, kids were running around, and babies were screaming. It seemed more like tourist attraction than a memorial for people to pay their respects. I'm happy to say that I don't know anyone who has their name on the wall and I'm sure that had something to do with the way I felt 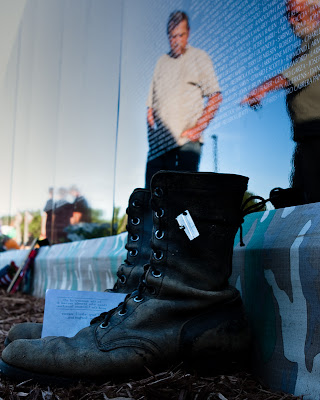 With the sun setting behind the wall, I knew I had to come back early in the morning when the light would much better for photography. I was up early the next day and at the wall just before sunrise. I was the only one there besides the volunteers working at the memorial. Being at the Wall by myself gave the memorial a completely different mood than it had the day before. This was the somber feeling that I was expecting to experience. Being there alone gave me the time to explore the Wall and the letters, and memorials that others had left behind in remembrance of their lost loved ones. 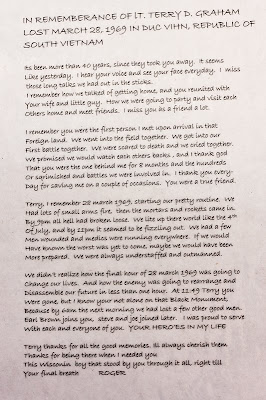 Reading the words that others had left behind, with tears in my eyes, was the experience that I hoped I would feel at the Wall. 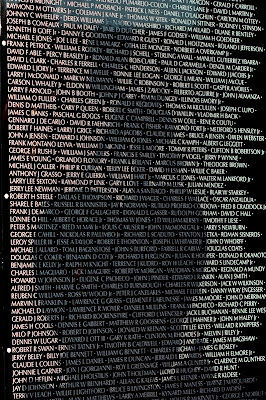 As the sun got higher in the sky a few people started to trickle in. Seeing these small numbers of people quietly paying their respects, and looking for the names of their loved ones really reinforced the true meaning of what the Wall stands for. The Wall is not meant to be a "tourist attraction" which is the feeling I got on that first day. Seeing, and feeling the true meaning of what the Wall represents made me happy that I choose to go back and experience the Wall by myself. 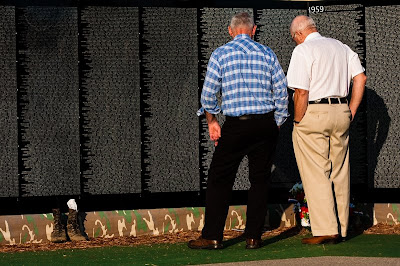 Spending time viewing The Moving Wall was a great experience for me. It reinforced my desire to visit Washington D.C. to see The Wall. 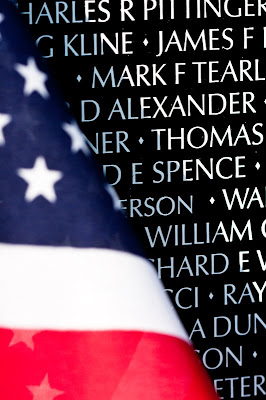 A big thank you to all of the brave men and women of our armed forces. Your service to our country does not go unnoticed.
Posted by Michael J. Smith at 5:34 AM 1 comment:

Amy and I took an extended weekend and headed for the north woods for a few days. We camped on Perch Lake with Holley, our black lab, and Jinjer, our golden retriever.
My goal for this trip was to relax, and scout out a location for a photo trip for next spring. The main subject I was looking for was the common loon. It's a little too late for the loons to have chicks riding on their backs, but that's OK. I don't have any loon images in my portfolio, so just getting a nice photo or two was one of my goals. 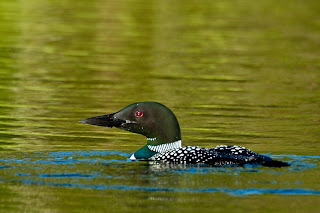 Another goal I had was to try to take photographs from a canoe. I want to purchase a kayak or a solo canoe to take photos from, and I thought this would be a good test. I rented a canoe and went out in search of the common loon. I was in luck as there were 2 loons on the lake. Photographing out of the canoe provided me with a way to get close enough to the birds to make some nice photographs, but it was a bit of a challenge. I used a monopod and turned my ISO up a bit to try to get a fast enough shutter speed to help avoid camera shake do to my use of a long lens. It took some time, and lots of patients, but I was happy with many of the images I created on the lake. I only had good light, and good weather on one day, so I was glad that I went out when I did. 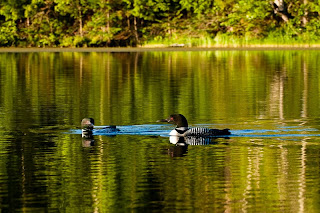 Besides the loons, there was also an osprey nest along the lake. Without the canoe, I never would have found this. I didn't get many chances for osprey photos, but it's good to know for next springs trip. 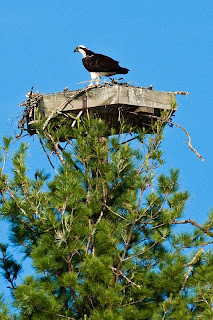 There were also beavers living in the lake. This was first noticed while relaxing on the shore as a beaver swam towards us. When I saw it getting closer, I went to the car to get my camera. As I was setting up, Jinjer saw the beaver and thought it would be a good idea to go investigate. The result was a wet dog, and no beaver. Jinjer appeared to have a lot of fun trying to find the beaver among all of the lily pads. 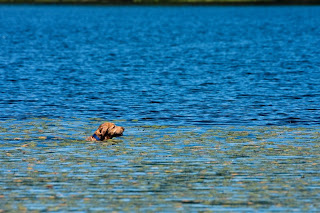 I was fortunate enough to find the beaver later on while I was out in the canoe so I was able to get a few images. We also found a couple more beaver lodges while hiking to some other lakes nearby. 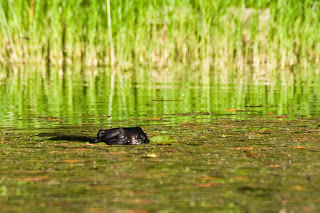 I was able to enjoy two nice sunrises. I missed the most dramatic color of the first one, but I'm still very happy with the images I was able to create. 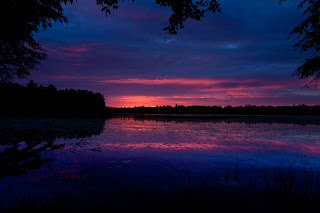 The sunrise on the second day wasn't as colorful, but still a pleasure to watch. 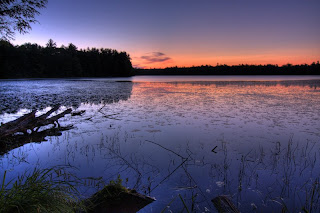 During the day the light was very harsh and it was a little too windy to be out in the canoe so I decided to make some photographs with the intention of creating an HDR image once I got home. 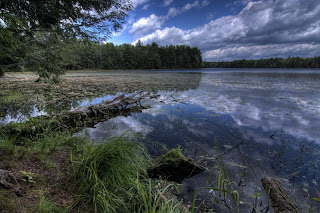 The sunrise on our last morning was not very colorful at all. It looked like it could storm at any moment, but it never did. I decided to experiment with zooming my lens during a long exposure. I kind of like the way this image tuned out. I think the effect adds to the ominous feel that the sky had that morning. 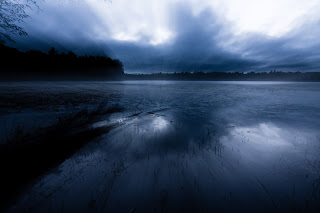 All in all it was a very nice little getaway. The mosquitoes were pretty bad but once the wind picked up, they were gone. I wish the wind would have had the same effect on the ticks. We found dozens of them on our dogs, as well as ourselves. We are still picking them off of the dogs. I found 4 more on Jinjer tonight...
Posted by Michael J. Smith at 1:03 PM No comments: