If you've been into photography for a while, you have probably heard the rule of thumb in regards to the minimum shutter speed you should use when hand holding your camera in order to eliminate camera shake and to get a sharp photo. If not, the rule is pretty simple. To figure out the minimum shutter speed you should use simply put 1 over your focal length. For example, if you are using a 50mm lens you would put 1 over 50 or 1/50 sec. to determine your shutter speed. If you're shooting at 100mm you should use at least 1/100 sec. to help eliminate camera shake. This is pretty simple math, but don't forget that you also need to factor in the crop factor if you are shooting with a DSLR with a smaller than full frame sensor.

That's all fine and good, but what happens when conditions don't allow you to use that fast of a shutter speed and you don't have an image stabilized lens or camera? There is a trick you can use to help improve your chances of getting a sharp image at slow shutter speeds. The trick is pretty simple and can work wonders. The first thing you need to do is to set your cameras motor drive to the fastest frame rate that it has. The faster the better for this technique to work. Then once you get your subject in focus, press and hold down the shutter button and take a series of 3-5 consecutive exposures before releasing the shutter button. As you press the button down, you are adding more movement to the camera, and as you release the button you are doing the same. By pressing the button, and holding it down, you are still taking photos but you are not moving your finger so you're not adding more camera shake. Chances are that one of the images in the middle of the series is going to be much sharper than the first and last images.

For the last couple of months I have been photographing wildlife from my kayak. A kayak on the water, although pretty stable as far as a boat goes, is not very stable as far as a shooting platform goes. I find that a tripod in the boat is too much of a hassle, but a monopod works great. My old Sigma 170-500mm is my main wildlife lens but it has some limitations. The major one is that it is too soft for my tastes when shooting wide open. I have to shoot this lens stopped down to f/9 in order to get sharp images which in low light, gives me painfully slow shutter speeds, even when I boost the ISO to 800. Also note that this lens does not optically stabilized. Using the burst mode and a monopod has allowed me to get acceptably sharp photos at long focal lengths and relatively slow shutter speeds.

Here are a few examples of what I'm talking about. In the series of frog images, all were shot at 500mm with a shutter speed of 1/60 sec. Keep in mind that the rule of thumb mentioned above means that I should have a shutter speed of at least 1/800 sec in order to help reduce the effects of camera shake. (This is because of the 1.6x crop factor of my camera body. 500mm x 1.6 = 800) That's almost 4 stops slower than the rule of thumb! By shooting a series using the motor drive, you can see how much sharper the middle image is than the first and last images. (You may have to click on the images to see them larger to really notice the difference.) 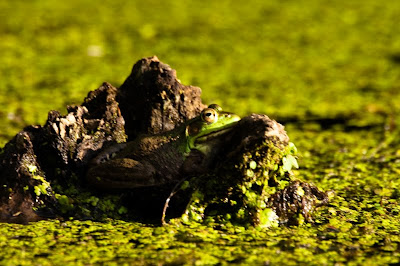 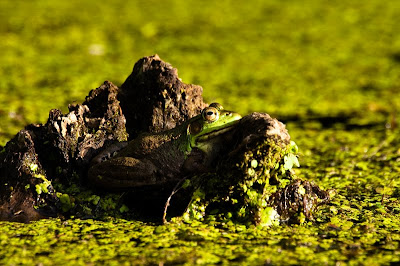 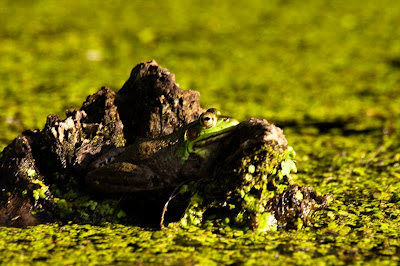 Here is another example from this weekend. This young bald eagle was perched in complete shade giving me a shutter speed of 1/20 sec! That's over 5 stops slower than the rule of thumb! These images were shot at 500mm and cropped to show about 50% of the actual frame. 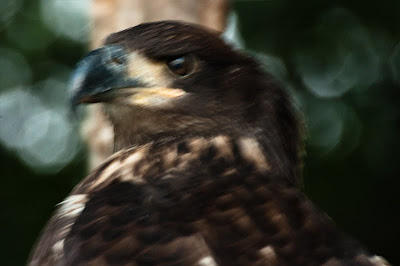 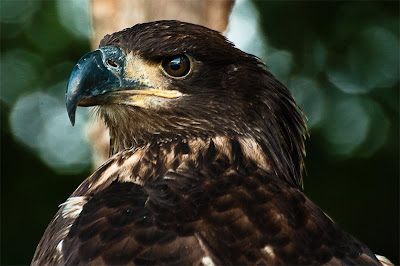 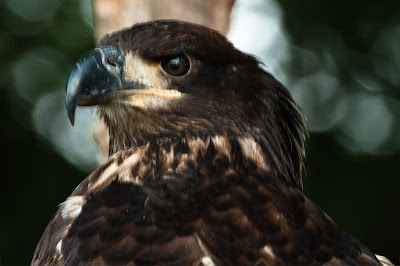 Here is my final version of the 2nd image after applying a little sharpening. 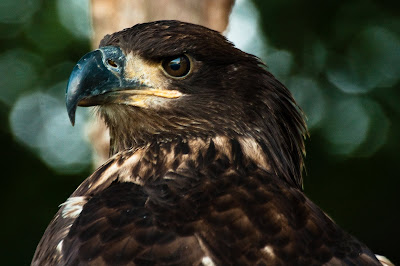 So when you're out in the field and you are stuck photographing as a slow shutter speed and you don't have a tripod, remember to try using your cameras motor drive to improve your chances of getting a sharp photo.
Posted by Michael J. Smith at 6:32 PM 1 comment: